skip to main | skip to sidebar

The Federation of International Football Associations - FIFA 2010 World cup holds it's 19th edition in South Africa between June 11 and July 11. This is going to be the first ever FIFA world cup to be held in Africa. Africa is excited, it promises to be a lot of fun and celebrations as all Africa is joining hands with South Africa, the host nation to make it a memorable tournament. Africa wants to use this opportunity to show the world it can deliver if given the opportunity.
Japan Africa Network joins all Africans, to say "Welcome to Africa!!!"
Posted by Africa Rising at 8:40 PM No comments: 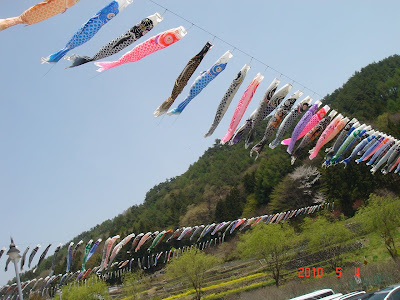 Koinobori - Carp Streamers
5 May 2010, It's Children's Day in Japan. As part of celebrations every year, Japanese homes and cities are adorned with streamers called koinobori. We ran into thousands of these streamers on our way to Kiyosato in Yamanashi, Japan. This is a rare sight as you may find one or a few streamers here and there but not this many streamers(koinobori) in one place.
Posted by Africa Rising at 6:47 AM 2 comments:

Cameroon: Japan Africa Network - Country of the Month, May 2010

Cameroon celebrates independence/national day this May 20th and Japan Africa Network joins all Cameroonians, friends and well wishers to celebrate this august occasion. We have selected Cameroon as our "Country of the Month May 2010" as part our project that highlight African Independence from colonial rules and to also provide information about countries of Africa. Below is a brief history of the Republic of Cameroon.

Germany was the first to colonize Cameroon in 1884 but lost that control after World War 1 to France and Britain - under a UN trusteeship. The struggle for independence in Cameroon was hard and torturous, and to all those who laid down their lives for the independence of Cameroon; today we say "congratulations, you are our Heroes". French Cameroon got independence from France on 1 January 1960 as Republic of Cameroon under Ahmadu Ahidjo of the Cameroon National Union -CNU. The British Cameroon merged with the Republic on 1 October 1961 creating a Federal Republic of Cameroon. This name was later changed in a unitary government to United Republic of Cameroon on 20 May 1972, a day which is today celebration as the country's independence day.

President Ahidjo using "planned liberalism" laid the foundation for a country that will be fully independent and self sufficient. That system places priority on cash crops and petroleum exploitation, and in spite of its failures, it arguably laid the foundation for Cameroon today becoming a well known primary commodity economy; exporting cocoa, coffee, cotton among other agricultural products, and crude oil. President Ahmadu Ahidjo also succeeded in establishing a stable country and later handed over power on 6 November 1982 to his Prime Minister, Paul Biya who still rules today and is in his 3rd term as President of Cameroon. The country under President Biya has been pursuing various IMF/World Bank designed programs since 1990 to spur business investments, increase efficiency, improve trade and recapitalize the nation’s banks.
The country is home to the 4095m high Cameroon mountain, rare Chimpanzees and diverse wildlife chiefly cheetahs, gorillas, hippos, rhinos, buffaloes, panthers, giraffes, crocodiles and various species of birds. The must-see tourist destinations include Parc National du Waza for abundant wildlife and famous for its elephants; Parc National du Korup located in the rain forest region is highly recommended for bird watchers and lovers of flora and fauna. If you are looking for clean and exotic beaches to relax for some sea foods, the beach resort towns of Limbe and Kribi is your place while Douala and Yaounde, Cameroon’s largest and second largest cities respectively are recommended for their national parks, museums and monuments.

http://www.japanafricanet.com/
Posted by Africa Rising at 6:14 AM No comments:

Japan Africa Network joins all Senegalese, friends and all Africans in diaspora to celebrate Senegal’s 50th Independence day. Congratulations!! On this historic independence anniversary; you are our African Country of the Month of April 2010.
Senegal’s 50 years of nationhood began with the signing of a power transfer agreement with France on 4 April 1960 for an independent "Mali Federation" - a merger of Senegal and French Sudan(present day Republic of Mali). This colonial merger soon broke-up in August same year after independence giving birth to present day Senegal and the Republic of Mali.

On 6 September 1960, Leopold Sédar Senghor; a poet, philosopher, the first African member of the Académie Francaise and one of the most important African intellectuals of the 20th century was proclaimed President of Senegal. He governed till 31 December 1980 when he voluntarilly handedover power to his successor Abdou Diouf, who later in 2000 transferred power to the current President; Abdoulaye Wade. Senegal has been widely recognised as one of Africa’s stable democracies and a model with a multi-party system and having twice transferred power from one civilian government to another and has also transferred power between two political parties. In Senegal, political activities and participation are known to be very robust and leadership, peaceful.
Though Senegal remains a donor-receiver nation, the economic reform carried out by the government puts it among the fastest growing economies in the world. Major sources of income includes agriculture, tourism and homeward remittances from Senegalese living abroad. Senegal’s major tourist destinations includes Goreé - a small island off the coast of Dakar, where western powers warehoused slaves(men, women and children) in very small cells before being shipped through "The Door of no Return" to the "New World". There are six national Parks with Niokolo Koba being the biggest and Djouj - one of the world’s most important wetland bird sanctuaries. Other tourist destinations are the exotic Saly Portudal and Saloum Delta Island, Saint Louis - the old capital built in 1659 and the Pink Lake - completely pink naturallake with a thick crust of salt at the bottom.
Congratulation Messages 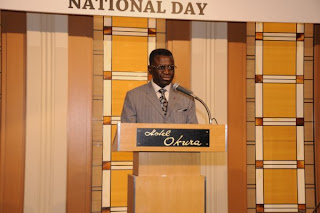 HONOURABLE MEMBERS OF THE DIET,
EXCELLENCIES,
LADIES AND GENTLEMEN,

I AM DELIGHTED TO SAY THAT THE CELEBRATIONS OF THE 34TH ANNIVERSARY OF NATIONAL INDEPENDENCE ARE BEING HELD AT A TIME WHEN A CLIMATE OF PEACE, CONCORD AND HARMONY PREVAILS THROUGHOUT THE COUNTRY.

IN THE ECONOMIC SPHERE, DESPITE THE ONGOING ECONOMIC AND FINANCIAL CRISIS THAT HAS BEEN SHAKING THE GLOBAL ECONOMY SINCE LAST YEAR, WE ARE HAPPY TO NOTE WITH SATISFACTION THAT UNDER THE WISE LEADERSHIP OF HIS EXCELLENCY PRESIDENT JOSE EDUARDO DOS SANTOS, THE ECONOMY OF THE COUNTRY KEEPS GROWING SATISFACTORILY.
IT IS IN THIS CONTEXT THAT ANGOLA IS REGARDING THE ONGOING ECONOMIC AND FINANCIAL CRISIS AS AN OPPORTUNITY FOR GROWTH IN THE COUNTRY, BY THE FACT THAT IT HAS LED US TO DEVELOP OTHER INITIATIVES, ESPECIALLY POLITICAL AND ECONOMIC ONES IN THE FRAMEWORK OF DIVERSIFICATION OF THE VARIOUS SOURCES OF INCOME, THUS MAKING THE ECONOMY LESS DEPENDENT ON OIL AND AT THE SAME TIME PROTECTING IT FROM EXTERNAL SHOCKS.
............ Get full multi-lingual (English, Portuguese, Japanese) text here: http://www.japanafricanet.com/whatsnew/country_of_the_month_november2009.php
Posted by Africa Rising at 10:40 PM No comments:

This is a video clip of two Africans: Mamadou Lo and Abdou Bayefall performing in Japan.

Mamadou Lo is a multi African-drummer, plays about 14 different African drums and a member of the SAFAIKO percussion band. He is also a songwriter and singer.

And Abdou Bayefall, while popularly known as a prolific African dancer and African dance teacher, he also is a multi African drummer/instrumentalist.

They both hail from Senegal in West Africa and current live and perform all over Japan. I recently ran into them at the French Instistute in Tokyo, Japan. I hope you enjoy this video. 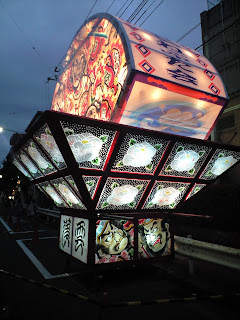 Main display at the entrance to the Kunitachi Nebuta festival between August 14th and 16th; 2009.
The Nebuta art works are wooden frames covered with Japanese papers with beautifully designed images of samurai warriors and their horses, historical scenes, women, flowers etc. The display is always at night with hundreds of light bulbs inside making the Nebuta glow. They are moved from place to place on carriages accompanied with drums, flutes, singing and dancing in a kind of floating parade . It's very colorful and a beautiful scene to watch; viewers are also welcomed to join in the processions.
Posted by Africa Rising at 11:49 PM No comments:

Africa Rising
Tell everybody about Africa.